The first of the Return to Emerald City novellas is now available as a standalone, with a GORGEOUS new cover. 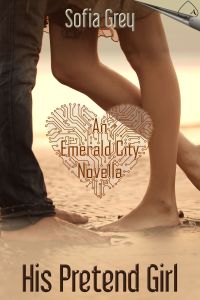 Dorothy’s life is too complicated for things like commitment and long term relationships. But if she were to hook up with someone, it would be Matthew Bradley… The gorgeous guy from Sales with the heart-melting smile, and smooth-as-chocolate voice. The problem is, he’s too busy noticing every other woman in the office to give Dorothy the time of day.

Enter Ben. He’s friendly, as a fellow programmer he gets her, and Dorothy has to admit he looks pretty sexy in a tux. He offers his services as her fake boyfriend for the company Christmas party, strictly to make Matthew jealous of course, and Dorothy jumps at the chance.

When it turns out Ben wants more than a pretend girlfriend, Dorothy has to decide if she’s holding out for the implausible when someone impossibly wonderful is already by her side.

We’ll be re-releasing these stories one each week during August, so look out next week for more news 🙂

Excerpt from His Pretend Girl

After an hour of trying to stare at Matthew without either him or Ben noticing, I finally escaped and headed straight for the coffee cart. Ben’s words rang in my head on a continuous loop. Ben had noticed I liked Matthew, and if he’d spotted my crush, it had to be blindingly obvious. So why hadn’t Matthew? Maybe he thought of me as one of the boys, like my own team did. For once, it would be nice to be noticed.

My thoughts swirled and darted in random directions. The big Christmas party, the one for all the Wellington employees, was next week. If I wanted to make a real impression on Matthew, that would be the place to do it. I was flying back to Emerald City for the holidays, but that wasn’t until a couple days later.

How about if I dressed up? Wore a slinky evening gown instead of my usual black slacks and shirt, put on fuck-me heels instead of flip flops, and got my hair and makeup done beforehand? My heart beat a little faster. Could I do it? The women he dated were always well groomed and elegant. That was why I thought he liked me—I was different from his normal floozies—but maybe that was where I was going wrong. I had no idea. I needed a guy’s perspective, but who could I ask?

“Hey.” The familiar voice came from behind me. “You look miles away. You okay?”

Ben. Standing beside me at the cart. How long had he been there? I watched, dazed, as he dug into a pocket, before holding out his phone to pay for his drink. Unlike most of the programmers I worked with, he had nice hands—with long slender fingers and neat, clean nails. I pulled myself together.

“Yeah, just thinking.” Ben was the closest I had to a male friend. Could I trust him?

He flashed me a smile, and then frowned. “What? Have I got something on my face?”

“No.” Still I stared, uncertain. He already knew I crushed on Matthew. What did I have to lose?

I took a deep breath, tried to calm the butterflies that danced in my stomach, and cast around for the words I needed. “Can I ask you something?” It came out in a jumbled rush, and I forced myself to slow down. “If you have a few minutes.”

Come on, Dorothy. If you can’t even ask Ben for help, there’s no way on earth you’ll ever attract Matthew. “Ben, if a girl was interested in you, how would you know?” I steeled myself for his laughter. It didn’t come.

“In me?” His lips tugged up at the corners. “Someone like who?”

Jesus. Why had I even started this conversation? “Not you, per se, I mean in a general way. Hypothetical.” Damn. I was blushing already. My stupid pale complexion meant I went pink at the slightest thing.

Ben took his coffee, picked up the ignored cup in front of me, and nodded toward a wooden bench. “Should we sit down?”

I followed him and sank onto the seat, taking my drink. I loved that Wellington was still uncrowded, and had space for random parks and benches. Sitting together in the sunshine made the conversation easier.

“In a hypothetical way,” said Ben, “you mean how does a guy know when a chick likes him?”

If I blushed any more, you’d be able to fry eggs on my cheeks. I nodded.

He shrugged. “I like it when a girl talks to me. When we have things in common. If she flirts with me.”

I already talked to Matthew. We both liked going to the movies and eating dark almond chocolate. Maybe it was just my flirtation skills that needed brushing up?

Ben had gone quiet, and I snapped my attention back to him. He slipped off his specs and rubbed his eyes, all the while looking at me. “I don’t think you’re talking about me though.” His voice was strangely flat. “You mean Matthew.”

“I like him, but he doesn’t see me that way.” If I was going to humiliate myself, I might as well go the whole hog. “What do I have to do, Ben? How do I make him notice me?”

There was a long moment, during which I wished I’d kept my mouth shut, and Ben just looked at me. Then he leaned back and stretched out his legs. He looked calm and unruffled, and as if I hadn’t just spilled my guts all over the pavement.

“Well…” He paused, took a thoughtful sip of coffee, and gazed into the distance. “There is one thing you could do, but I don’t think you’d like it.”

His eyes met mine, and I noticed for the first time how blue they were. They’d always been obscured by his specs before. It was a quaint and old-fashioned choice of his, but not everyone liked corrective surgery.

“It’s the Wellington party next week.”

I nodded again. I’d turn into a bobble-head at this rate.

“Well, the thing I’ve noticed about Matthew Bradley is that he likes a challenge.”

“He usually goes for chicks that are already taken. Angela, just married. Annalise, gone back to her ex. Siri, engaged. I’ve never seen him go after a single chick.”

I blew out a breath as I processed his words. He had to be wrong. That made Matthew sound like a creep. “So in order to get his attention, I need to have a boyfriend first?” My voice rose. Ben had to be mistaken. It sounded even more stupid, when I said it out loud. “Like how? Rent-a-date? And if I even had a date for the party, how would I tell him that I wasn’t interested? That I was just using him?”

I put my coffee cup on the ground, and bent forward to bury my face in my hands. “Gah. I didn’t mean it like that, Ben. I just meant…” You’re too nice to use like that. “I thought you’d already have a date.” I improvised.

“Well, I don’t. The girl I wanted to take is going with someone else. So if I’m free, and you’re free, why don’t we make Matthew Bradley so freakin’ jealous, he can’t resist you?”

My heart hammered against my ribs. Was it possible? I risked peeking at Ben through my fingers. He sprawled there in the sunshine, sipping his drink, gaze on me. “What do you get out of it?” I asked.

“At least three dances on the night, and dinner the night after. To debrief.” He took another sip. “If you’re busy chez Bradley, then dinner on the first night you’re free.”

It sounded too easy. No, it sounded terrifyingly risky. “No strings? You won’t, uh…” I couldn’t find the right words.

“I promise not to expect anything. Apart from three dances and one dinner.” He gave me a faint smile. “I won’t do anything inappropriate.”

Three dances and one dinner. “Deal.”