Scott’s story has been extended for it’s release as a solo novella – and it’s live now. Grab your copy for $0.99 🙂 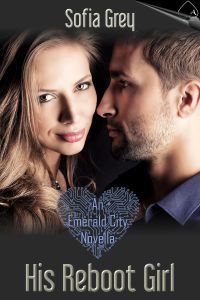 Scott wakes up with his head spinning, and not much else going on in his brain. He’d love to take the time to stop and figure out who he is and what he’s doing in a hospital bed, but apparently he’s the key suspect in a terrorist bombing.

The woman by his side insists she has the answers to his past, but the more he uncovers about her motives, the less he trusts her. Especially when one of her hostages triggers fond memories for Scott. If he can’t discover the truth on his own, his life won’t be the only one on the line.

Buy it from AMAZON

I needed a minute to myself. The bathroom door was just a few yards away. I sucked in a deep breath and made my feet move.

The face that stared back from the mirror was a mess. My collar length hair was matted and dirty, and bruises raked my face, along with more fine cuts and scratches. Another memory seeped in. My nickname had always been ‘Scarecrow,’ and now I looked like one—straw for hair, and a head full of stuffing.

A long, raw scrape ran from my right temple down to the top of my jaw. I touched it, curious as to why it didn’t hurt. It stung under my probing fingertips, and I realized why. The hospital had to have pumped me full of painkillers or sedatives, or something to dampen my neural responses.

My knees shook, and I sank onto the floor, my back to the wall. Fears crowded in, as though I’d given them permission to emerge. This wasn’t my life. It couldn’t be. A bomb on the Mag-Line? The breath jammed in my chest at the thought. What the fuck did I know about bombs?

Black spots danced in my vision, and I forced myself to breathe. In, and out. Slow and steady.

I had to start with facts. What did I know, as opposed to what I thought I knew? My name. The nurse had called me Scott. I’d had an accident of some kind, and landed in hospital. There was a head injury involved. Another breath.

Adele said the police were going to arrest me. That I’d set a bomb and been caught in the blast. I dropped my head and rubbed the back of my neck, trying to ease the steady pounding in my head. I only had her word for both of these things, and my gut instinct screamed she was lying.

If she’d lied about those two things, it was entirely possible she wasn’t my girlfriend after all.

And if that was true, what was really happening?

A thump on the door broke my concentration. “Scott? You okay in there, baby?”

I licked dry lips and composed myself. “Yeah,” I rasped. “Out in a minute.” My throat hurt, but maybe a drink would help. I pulled myself up, cupped my hands under the tap, and gulped some cold water. The chill brought another wake-up moment. What should I do now? Play along with their story, while I tried to figure out the truth?

It was the best plan I had.

On my way back into the lab, it struck me that if there had been a bombing, it would be all over the news. Adele glanced up and caught my eye, but stayed with Donny. Did she really think I’d buy the story about them being siblings? It was as unlikely as the Mag-Line being bombed.

I settled at a desk close to the bathroom, and tapped the embedded screen to wake it up. Funny how I could remember some things, but not others. Moments later, I connected to the twenty-four hour news channel. The pretty anchor girl spoke rapidly, as screen after screen loaded with images. The rolling caption froze me in my seat.

Images of a Mag-Line carriage, the entire side ripped out, as though a giant had tried to tear it in half.

The debris of what used to be a Mag-Line station. The designation plate was just visible in a pile of blocks and dust.

I trailed my fingers across the screen. It was real. Somebody had bombed the Mag-Line. Not me. I couldn’t do that.

Footage of the bomber clearly captured on security cameras.