Eight years ago I moved halfway around the world with my family, from England to New Zealand. It’s been a good move, and I love my new home, but there are odd days when I’m hit with a blast of nostalgia. Not quite homesick, but something close.

We have a few new people at work, and one of them comes from close to my home town. New Zealand is such a melting pot of cultures, so many migrants from every part of the globe, that hearing a familiar accent instantly lifts my day 🙂

I could go back to the UK to visit, but it wouldn’t be the same. Like going on holiday to somewhere you went as a child, and finding it unrecognizable. I don’t want to shatter my memories. I do miss the shops though.

Maybe this is why so many of the characters in my books are also far from home?

In Seeing the Love, Natalie moved to New Zealand from France as a child. In this excerpt she is talking to Lucas, a colleague, on the phone:

Time to steer the faltering conversation down a safe track, before Natalie embarrassed herself any further. “So”—her composure was as fragile as spun sugar—“What do you have planned for this evening?”

She heard a rustling noise down the line, and then Lucas cleared his throat. “The usual. Gym. Walking Molly. Do you speak fluent French, then?”

The sudden question caught her off guard. “Yes. Why?”

He hesitated. “I was thinking of taking lessons. Maybe you could teach me a few phrases? You know, the useful ones.”

A fat salty tear trickled down Natalie’s cheek, and she scrubbed it away with her fingertips. French lessons? She’d get to listen to him speaking in the most beautiful language in the world. “You don’t want to know how to buy a feathered hat for your aunt?”

A muffled snort sounded in her ear. “Not much call for feathered hats,” he said. “More like ordering a beer. Buying food. Basic tourist stuff.”

“I could do that.” She took a moment to find a tissue in her bag and blow her nose. “Are you planning a trip?”

“Yes.” He was confident and smooth again. The anxious note had left his voice. “It’s something I’ve been thinking of for a while. Where did you live?”

“All over. Papa was an artist, and we moved around with his exhibitions. Maman was a book editor, so she could work anywhere.”

“Did you have a favorite place?”

Did she? Out of the jumbled impressions that she had of France, there was one that stood out. “Paris. We mostly lived in the country—Papa preferred to work outside—but we spent two months in Paris. I’d never been anywhere so exciting.” Memories flooded her brain, as though she’d opened

a tap. The Louvre at night, all glass and angles. The gardens of the Tuileries. The River Seine, gliding along like a giant snake. “I was very much a country mouse going to the city for the first time.” She recalled peering through the massive store windows, gazing at the world through different eyes. “It was an adventure.”

“So how did you end up in New Zealand?”

“Maman was offered a great job here, so we came over to try it for a few years.” She remembered her trepidation at starting another new school. She’d developed an aloof shell, and it had stuck with her. She shrugged, and then realized Lucas wouldn’t be able to see her. “We liked it.”

They fell silent again, but this time it felt comfortable. Natalie took a quick breath. “I have to go now, but yes, I’ll teach you some phrases.” She smiled, knowing just where to start. “Bon soir, Lucas. Good evening.” 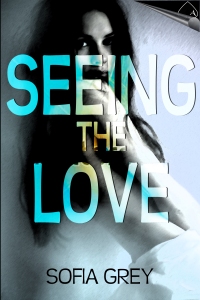 Lucas Wade is losing his sight. As the darkness threatens to swamp him, the one bright spot in his day comes in the form of Natalie Fontaine. She works in the sales office, hundreds of miles away, and she alone treats him like a regular guy. She has no idea about his disability, and he doesn’t plan on telling her about it.

But if Lucas can’t be honest with her, Natalie may never see the love he has to offer.

Get a FREE Kindle preview HERE