The Boy in the Sixth Form pt. 1 (aka My First Valentine)

One Valentine’s Day stands out in my memory. I would have been fourteen, and had a HUGE crush on a boy at school. He was two years older than me, and at fourteen, that kinda age difference was crippling. He joined our math class each week, and when I learned his favourite candy was lemon bonbons (a chewy English candy, not unlike

toffee), I made sure I always took a bag to class with me. I joined the amateur dramatics group, because he was a budding thespian, despite never being interested before. I developed a brief fascination with football when I learned he played for a local team, and I also joined the tennis club. Guess who played tennis there?

After months of talking to him in the math class, spending half my pocket money on candy that I never ate, and watching a sport that I hated, it was finally Valentine’s Day, and I had an excuse to express my teenage devotion. I bought a card for him. I agonized over what to write. How to hint at my identity, without being obvious?

Happy Valentines Day, I wrote. That’s all. SO LAME! Where was the witty line, the inside joke, the freaking giant clue that I was madly in love with him? Where?

I walked past his house ridiculously early, and shoved it through the letter box before running away. Would he like it? Would he connect it with me?

The following day I was on tenterhooks. It was maths, currently my favourite subject. I bought bonbons.

He arrived, hand in hand with another girl from my class. 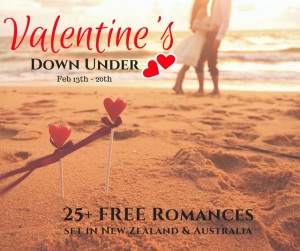 Romantic heroes are always a safer bet, so how do you fancy meeting 25 of them? Or more?

I’m taking part in the Valentine’s Down Under promo on Instafreebie. You can download scores of FREE romance novels, all set down under, in New Zealand or Australia. One of my wolfie books is featured – Caging the Wolf.

The promo runs until 20 Feb, so grab your freebies while you can 🙂

P.S. Come back next week for The Boy in the Sixth Form part 2