We had to light the fire again this morning. Autumn has definitely arrived, and with it, a yearning for one-pot warming dinners. I had several packs of frozen minced (ground) beef in the freezer, and I really wanted to make lasagne, but therein lies a problem. Darling Son doesn’t like pasta. Any pasta. He also hates rice, but that’s another issue.

So could I make lasagne without any pasta layers?

When I googled alternate lasagne recipes, they recommended to use thin slices of courgette or aubergine, but I can imagine the reactions in this house if I did that. I contemplated using thin slices of potato, like in a gratin, but that felt like too much hard work today, so I stared in the larder for inspiration.

Tortillas. I had a couple of packs of wheatflour tortillas. Thin, yet sturdy. Would they hold the dish together? I’d give it a try.

This could be a whole new meal!

I made the ragu base as usual. Browning the minced beef with crushed garlic and dried mixed herbs, before adding some thinly sliced mushrooms that I found at the bottom of the fridge. A splosh of balsamic vinegar and the same of cider. Two cans of tomatoes, and a big splodge of tomato puree, and then two teaspoons of sugar. An Italian friend told me years ago to always add sugar to tomato-based sauces, to reduce the acidity, and it works a treat.

It smelled GOOD! I made a simple white sauce, one that I make for everything from parsley sauce, to the base for macaroni cheese.

And then I had to assemble it. With round tortillas and a rectangular pan. 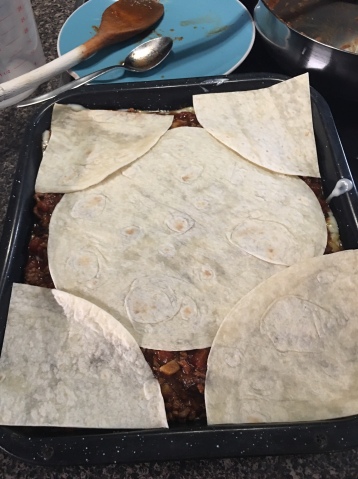 With grated cheese on top, it looks like a regular lasagne before – and after cooking 🙂

The proof of course, is in the taste. The tortillas were thinner than the pasta I’d normally use, and ended up with a slightly limp texture, but the taste was fine. I’ll make it again, but next time I’ll sandwich two tortillas together with some grated cheese for each layer. Double thickness might be better.

The compliments were lame. Son said it’s not his favourite but he’d eat it again. Husband said it was okay, but then ate a second portion. Men, huh.

Between you and me, if I hadn’t told them it wasn’t pasta, they wouldn’t have known. If you read the Chicken Mole entry from yesterday, you’ll see this is becoming the recurring theme…

PS – if you want a fantastic cookery book with basic, home cooking, you should look out for this one by Tom Norrington-Davies. It’s one of my most-used books, complete with multiple page markers, and flour / gravy stains – the sign of a well-used cook book ❤

Come back tomorrow to see what I can rustle up next time.

New Zealand is under Lockdown for at least four weeks. This blog intends to avoid the bad news about rising numbers of victims. It focuses instead on food, and the challenges of cooking fresh meals every day – with the ingredients from my larder. A much nicer message 🙂