I’m delighted to welcome Zoe York to July Fever. She’s written a gorgeous finding-lost-love romance and there are FOUR copies up for grabs today, plus another copy going into the Weekly Prize Bundle.

All you have to do is leave a comment (with your email address please!) and you might win a copy. Easy as pie 🙂 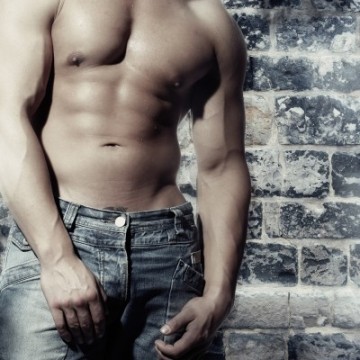 You know what’s hot? Fever inducing hot? Nice guys. And if they come packaged in a yummy bundle of muscles and easy smiles, wrapped in a tight t-shirt and fitted jeans, that’s a bonus. Or, if you’re writing a romance novel, a requirement, and thank goodness for that! But at the core of my favourite romance heroes is a special kindness. Maybe not for everyone. He might be gruff with his friends and short with people who waste his time, but for the woman he loves, even if he isn’t sure he wants to go there…he can’t help but be mindful of her feelings. Put her needs first. Be there for her, even when she’s not sure that’s what she wants. And he’s not going to call attention to it. Heck, he might not even be aware he’s doing it! But when she realizes just how nice he is, that woman’s not going to be able to help but fall hard.

Check out the trailer HERE

In my debut contemporary romance, What Once Was Perfect, the book opens with the heroine, Laney Calhoun, heading home for Christmas. But she has summer on her mind: a single season, twelve years earlier, when she thought she had it all. The last summer she spent in Wardham. The only time she’d ever been in love.

She’s not the only one wandering down memory lane. Kyle Nixon quickly realizes that having Laney just down the road over the holidays is going to be impossible to resist, although he’s going to try, because he’s a nice guy. Don’t worry, he fails miserably!

They sat like that for almost an hour. At one point, Kyle was convinced that she had fallen asleep, but he didn’t want to risk losing the moment, and he couldn’t see her face without shifting. Her head was tucked under his chin, and he didn’t mind, because her hair smelled amazing, an intoxicating blend of honey and some kind of fruit. Thank god her ass was perched high on his thigh and her legs were bent over his other arm, because in the space beneath he had developed a brutal erection. He couldn’t remember ever being this turned on by cuddling before, except maybe in those first few weeks of dating when they were still working on rounding all the bases.

He remembered every single day of that spring, the long string of her firsts: Laney slowly peeling off her t-shirt in the barn, then crossing her arms against her chest; her sliding across the bench in his truck, straddling him, grinding her jean-clad pussy against his cock; getting completely naked in a hotel room after the Science Society Formal Ball, wanting to punch a hole in the wall after their only condom broke. Laney had made that night worthwhile anyway, sliding his cock between their bodies, holding herself open, rubbing against the length of him until they both shattered apart. They’d spent the night twisted up in each other, and when Laney wrapped her warm little hand around him in the shower the next morning, he thought he’d died and gone to heaven. He returned the pleasure before check out, and two weeks later when he moved into his first apartment, they had an entire box of condoms at the ready.

She lifted her head and he was torn between wanting her to see where he had wandered in his mind, and hoping she’d return to her original position so he could keep smelling her hair like a pervert. He didn’t dare think that she might be wandering around the same spots on memory lane, even when she pressed her forehead against his chin, then rubbed up his face until her lips connected with his jaw. Kyle stifled a groan and eased her legs down to the ground, freeing his arm to press between their bodies.

“Laney, sweetheart, that’s not a good idea.” It’s brilliant, asshole, shut up. He could barely grind out the words. His body was not on board with being noble.

“Probably not.” She pressed against his hand, flat against her upper chest, stretching her body to reconnect with his face, and the upper swell of her breast filled his palm. This time the groan was louder. “Tell me to stop.”

“We’re going to regret this.” Freud would have a field day with what was going in his head. Baser instincts were definitely gaining traction.

“Probably. Tell me to stop.” Her lips found the corner of his mouth, at an angle, and then her face turned again and they were sharing the barest of open mouth kisses, her bottom lip resting on his, pressing it down. Her eyes were wide, pupils dark and full of want. He didn’t see any hesitation, only heat, and his resolve slipped. One kiss. He let her breath slip into his mouth, hot and moist, and he was lost, disoriented in a mixed fog of memories and unfulfilled fantasies.

With a slight jerk, his extended arm relaxed, allowing Laney to crawl back on his lap, straddling his hips this time, and she looked down at his erection with a smirk. “I knew you didn’t want me to stop.”

“Wanting you to stop and knowing you should are two different things. Hell no, I don’t want you to stop.” He dragged a ragged breath into his chest and ran his hands down the sides of her body, squeezing her hips, tracing over her thighs and then up again, harder this time, sliding his palms under her sweater and over the thin cotton tank top hiding underneath. “But I don’t want you to hate me, either.”

“I’m not an innocent college kid anymore, Kyle.” She wiggled her hips, trying to slide closer to the bulge in his jeans. “I like sex. You make me think of sex. I’m all fired up from fighting. Let’s go.”

It should have been an ardour-dousing wakeup call, the casual offer of something that was once so special to her, to them. The higher-thinking part of his brain was protesting that something was wrong, that Laney couldn’t possibly want a booty call, but all Kyle could focus on was the easy confidence that she had gained, how she must have gained it, and his primal need to re-possess that which he had lost took over. He could hear raspy need in his voice and he didn’t care. “Now it’s your turn to tell me to stop, sweetheart.”

What Once Was Perfect is now available at: