When I want a feel-good sexy romance, Lissa Matthews is my Go To Author. If I read too much angst and dark emotion, Lissa’s books will always restore a sunny smile on my face. I’m very happy to feature her as part of July Fever.

Lissa’s giveaway is any book from her extensive backlist, and to enter, you simply need to leave a comment (with your email address).

Over to you, Lissa 🙂

When I was a girl growing up in Northeast Florida we didn’t live far from the beach. In the summers, we’d get up early on Saturday mornings, pack some towels and an extra set of clothes, and the boombox (that’s what we called it in the 80’s). We’d make a stop at Publix (my favorite grocery store in the South), pick up sandwiches, sodas, chips, and snack cakes. We’d grab some sunscreen, maybe a few magazines, and a gallon of water.

We’d pile back into the car and hit the road.

It would take us a couple of hours to get where we were going, to drive past all the ocean front mansions, to find that perfect spot to park. Usually by 10am, we were laid out on the sand. We’d spend the day there, until 3 or 4 in the afternoon, until we were so tan and tired and full of sand and water logged.

This is something we did every summer for most of my pre-teen and early teen years. We’d hunt for shells and take long walks along the sand. We never went on what anyone would consider a vacation, but we’d take these one day trips to the beach. They are some of my most cherished childhood memories.

My family is no longer together. I no longer live in Florida. And I haven’t been to the beach in 10-15 years. But it’s what instilled in me my love of road trips, my love of day trips to spend a day with those I love. It’s about the smile a memory like that evokes in later years.

And if I ever need a reminder, this song reminds me and gets me in the mood for Summer…

And since we’re on the subject of road trips, how about a little excerpt from my book Twisted Up…

Ella stood on the sidewalk as Justin loaded her suitcase and laptop bag into the back seat of the black extended cab truck. It gleamed in the early afternoon sunshine. From what she could see, it had dark gray fabric interior with black piping. It fit him. It wasn’t what he’d driven when they first met, but since she hadn’t seen him for a few months…

“Okay. Come on.” He gestured for her, and she stepped down and met him at the passenger door. He blocked the opening with his body. “Take your panties off.”

Her eyes widened then narrowed as her brow furrowed. “What? Justin, I can’t do that.”

“Not out here in the parking lot. You should have said something back in the apartment.”

“Would you have done it then?”

“No one can see you at this angle. They can only see your feet and if you’re quick about it…” he shrugged. “But you’re not getting in my truck until those panties are off.”

“When did you get so bossy?” she grumbled, even as she reached under her skirt and started to slide her panties over her hips and thighs. Nervously, she glanced around as she quickly shimmied them down her legs.

“I’ve always been bossy. And I when I want somethin’, I want it.” He knelt before she could move and took hold of the green lace at her feet.

She lifted one foot, then the other. When he stood again, he grinned, lifted the panties to his nose and sniffed. The dreamy look was wonderful and the waggling of his eyebrows as he looked her over with lascivious intent made her giggle. She might think this was a very bad idea, going all the way to Texas with him, letting him take her back to his home, his bed, his territory, but she would bet every penny she had that he was going to make every bit of it worth her while and then some.

He moved out of her way, and she took a couple of cautious steps forward before climbing up into the seat. He gave her a little lift with his hands around her waist and helped her settle. “Don’t think I don’t know what you’re up to with that little panties game.”

His fingers deftly unbuttoned the top two buttons of her shirt and left it gaping open enough that anyone looking in the window, either from the side or from the front would be able to see the edges of her bra and the cleft between her breasts. She should be upset and angry with him, and she sort of was, but not enough to put up a fuss. She wanted him far too much and she’d already agreed to go with him. She’d spent more than half a dozen weekends with him and knew what she was getting into. She’d spent a year playing weekly trivia with him at the bar and grill she and some friends gathered at after work. She’d been friends with him, lovers with him and honestly trusted him. And, he came for her. It hadn’t been part of her plan because she hadn’t had one other than to get herself on her feet, but he’d come for her. It couldn’t have been an easy decision for him either. He didn’t chase after women. He simply let them go when they wanted to leave, despite his comment a few minutes ago about when he wanted something.

The thing was, since their first time together she hadn’t wanted to leave him.

Ella looked at him. He was standing between her and freedom. His hair was longer and a bit shaggier than before. His eyes were still the same mercurial shade of green framed by dark brows and lashes. His mouth was still sinfully full and when he smiled, she was worthless for anything else. He was a tall, very good looking young man and it never once occurred to her that she didn’t deserve him, that she was too old or that he was too young, that she was too heavy or that he was too irresistible. He wanted her, even after everything, he still wanted her.

If her heart had really been in it, before in the apartment or even now sitting in his truck, she could say no, she could put her foot down and tell him to go. They both knew he would go if he believed she wanted him to. They both knew she wouldn’t be able to convince him with words when her body and her eyes said something very different than go away.

“You’re trying to strip away my defenses.”

“Your panties are a defense?”

Okay well, when he put it that way it sounded kind of dumb because how much of an actual defense was a pair of lace panties? “You know what I mean.”

“That isn’t what I’m going for here, Ella. Accessible, yes. Flashable, yes. Strong and sexy, yes. But defenseless? No.”

He leaned forward and kissed her on the nose, a sweet little peck that was so out of character for the man he’d been today. The contrast made her smile. “Accessible, huh?”

“Flashable isn’t even a word.”

“Doesn’t mean it isn’t an idea.” He shut the door, and her gaze tracked him as he walked around the front end of the truck to the driver’s side.

He climbed inside and reached across the center console and gripped her thigh over her skirt. She looked down and watched as his fingers pulled up the fabric enough that he could side his hand between her thighs. She kept them tightly closed and glanced over at him. He only smiled and tugged on her left leg. His strength versus hers…

The second she relaxed against his touch, his hand was gone. “What? Why?”

He was right, too, damn him. He hadn’t forced her when they were upstairs. She put up token resistance, but the second she laid eyes on him standing outside her front door, her insides had melted. The previous times she’d been with him had been the most eye opening sexual experiences of her life. Eye openingly emotional too. Whether that was for the better or not remained to be seen.

“How long of drive is it,” she asked as he cranked the truck and put it in reverse.

Ella looked at the clock on the dash. “But, that means you’d have driven most of the night to get here.” It was only just after one in the afternoon.

“Cause I wanted to get here as soon as I could. Nothin’ but truckers on the road at three in the morning. Damn good thing I did or I’d have missed you.”

He was right about that. She’d been headed out the door when he’d knocked. He was the last person she expected to see, but she couldn’t deny how happy it made her that he’d been standing there, smiling at her in that lop-sided tilt of the lips way that she saw in her mind’s eye and in her dreams.

One rope. Three days. And two hearts on the line.

Justin has had enough. Ella, the woman who healed his broken heart, has been cancelling on him for two months straight. Sure, she’s busy with her job, which has her traveling far and wide. But that never stopped her from sharing nights of trivia, long conversations and blazing hot sex—until now. Truth to tell, he misses their easy friendship, the way her sighs fill his ear as he fills her body.

What he can’t figure out is, what’s changed?

At work, Ella finds it easy to talk to rooms full of strangers. Once back at her lonely apartment, though, she’s back to her painfully shy self—until Justin. Their chance meeting grew over the months into a year-long affair, but she can’t shake the feeling that rejection and pain are just around the corner. Best thing to do? End it now, before their intimacy digs too deep.

Suddenly he’s at her door with a length of neon-green rope and a naughty proposition, daring her to say no. Just how good could it be? There’s only one way to find out…

Warning: The sheets are tangled, the hat is crumpled, and the jeans are worn low on the hips. The cowboy is hot, determined, and helpless in the face of bunny slippers. Readers may need extra batteries to get this one out of their system.

I want to think Sofia for having me, for inviting me to visit during July Fever. I am going to be giving away a copy of any ebook from my backlist.

Remember, commenting will also put you into the draw for the weekly prize bundle: 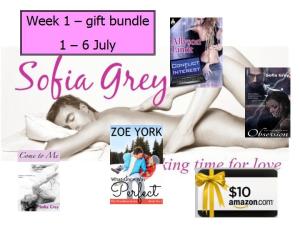 Do come back tomorrow and meet Debra Smith, author of the sexy shifter Koning Clan series 🙂