I’m thrilled to welcome back Nicola Claire with a fantastic giveaway!

Cleaning out my office recently and I came across eight copies of Kindred World books with earlier edition covers on them. Rather than box them up in a carton and hide them away for the rest of their foreseeable lives, I decided to run a competition and give them all away. See, even though these books have first edition covers on them, they still have the same exciting, heart-palpitating, fast paced, adventurous, sexy, mysterious and hot Paranormal Romance story in them as those books on sale today!

This giveaway includes the first seven books in the Kindred Series as well as the first book in the spin-off series: Mixed Blessing Mystery.

This includes, (in chronological reading order for the Kindred World) :

The winner of this giveaway will have just enough time to receive the books before the next release; the final instalment in the Kindred Series: Kiss Of The Dragon. The competition goes until 4th September 2013, with book eight in the Kindred Series due for release in September/October. So, plenty of time to collect up to the final book in readiness for the much anticipated conclusion to Lucinda and Michel’s story.

Take a sneak peek into Book One: Kindred…

Michel didn’t hesitate, he picked the knife up with his left hand and sliced the palm of his right, turning it over and offering it hilt first to me. My lips were dry, my throat felt tight, but I forced myself to breathe and accepted it. My hand was only shaking slightly as I dragged the knife against the sensitive skin on my palm. It stung and started dripping blood onto the polished concrete floor of the room. The vampires around me visibly stiffening. Great. 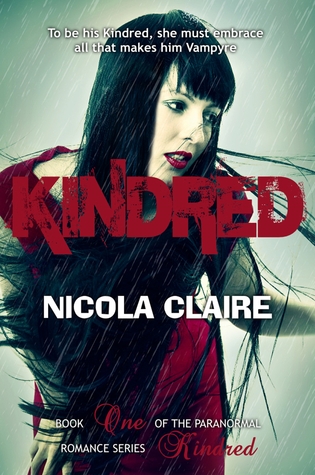 Michel sensed it too and so didn’t muck about. He reached for my hand and as soon as our palms met and blood mingled he shuddered visibly, standing almost rigid, his eyes closed with his jugular veins standing out starkly against the cream colour of his skin. He was swallowing hard, like he was fighting to stay in control, to handle whatever had poured from me to him. He tingled to the touch and blazed brightly, just for a moment, then opened his eyes and looked at me, a brief flash of surprise crossing his features, then settling into his usual lazy-dripping-with-sex gaze. I almost pulled away, the purple was so intense and then I felt it.

It started as a slow burn and soon erupted into an inferno. I couldn’t take my eyes off him and suddenly found myself next to his chest. He hadn’t pulled me to him, somehow I had taken the step necessary to put myself under his chin and against his chest. He smelt intoxicating, I found myself running my fingers across his chest, relishing the feel of his hard muscles under the material of his jacket and then I decided the jacket was too thick, so quickly fumbled with the buttons, determined to get the damn thing off him. He didn’t stop me as I rushed to push the jacket over his broad shoulders. But as soon as the jacket was on the floor, and my fingers had slipped inside his now opened shirt and were kneading his flesh with an urgent longing, I felt his hands come around me, touching me, moving up and down my back, over my bare shoulders and around to my collar bone and neck. The sensation his returning touch created was like lightning striking the earth.

Suddenly his lips were on mine in a bruising kiss, all hard passion and heated desire. There was nothing of the finesse I had come to expect from his kisses, this was pure demand and need and longing all rolled up in one. His tongue devoured me and I wrapped one of my legs around his thigh, crushing myself to him, opening my mouth up and giving as much of myself to him as he was to me. All of a sudden he tipped my neck back and I watched as his fangs come out and down in one swift motion, his mouth was on my pulse before I could protest, his fangs piercing skin within an instant, his Sanguis Vitam filling the air and the pull of blood leaving me startling. I stiffened at the shock of what he was doing. I had so not expected that, he hadn’t warned me, he hadn’t even hinted that that was a possibility. Of course, he had mentioned that feeding could be pleasurable to the donor as well as the vampire, so I had assumed it would take some part in sex, but for the life of me I had never really thought he would bite me.

And then, I wanted him to. I wanted this connection, this intimacy, more than I had wanted anything else in this world before and as those thoughts came pouring into my head I heard another’s voice, whispering, pleading, insisting, “mine, mine, mine, mine, mine.”

Oh good lord, what have I done?

He stiffened, as though he had heard me. I did only say that in my mind, didn’t I? Yes, because right now the only sounds coming from my mouth were whimpers and groans, not at all ladylike and absolutely no room for a coherent sentence in amongst them at all.

He pulled his fangs out and gently licked the blood that continued to flow, slowing it until it stopped altogether. He softly kissed the spot he had bitten, so tenderly, then pulled his head back and looked at me, his eyes blazing a deep amethyst, interlaced with pale violet – mesmerizing.

“So, do you still think this changes nothing, ma douce?”

Oh, God in heaven help me.

And here’s what people are saying about the Kindred & Mixed Blessing Mystery Series:

“I was excited through every page, no skimming or reading fast through this one. Every page had something new and exciting. Of course I adored the main characters, but the secondary characters that came and went, or stayed, were all fantastic and lively. The world Nicola Claire has created in Auckland, New Zealand is really wonderful.”

“This is the best vampire book I’ve read in a long time and If you like the paranormal world of vampires, shape shifters, ghouls and magic this book is a must read! The writing was seamless and the character development was outstanding.”

“Kindred completely stands on its own in originality… This book was action packed from the first page. I was immediately drawn in, and Nicola Claire has a unique way of telling a story.”

“The writing flowed nicely and kept me wanting more. I found myself staying up late to read. When I finished the book, it remained with me. I would find myself daydreaming about the characters and the Kindred world. I can’t wait to read the next book in the series titled, Blood Life Seeker. I think I’ve located my new favorite series!”