This will be out soon, and I’m looking forward to it being available to everyone. It’s a dark tale, an Ugly Cry, that pulls no punches about PTSD and depression. It left me an emotional wreck when I wrote it, and judging by the early reader reviews, they’re experiencing that too 🙂

“I had a hard time helping to edit this story because I kept crying. EVERY single time I read it even after I knew what was coming. Emotional and heartbreaking and totally wonderful. Love it.” – A.L.

“It’s not light or fluffy but I completely loved this story.” – Lucy

“Amazing even if I did cry like a baby.” – Bookbee

“Boy, was this one heart-wrenching story, but so damn good.” – Fritz42 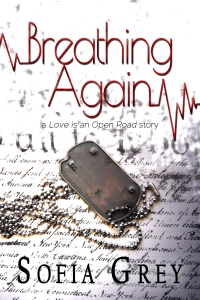 Sgt. Travis Cooper is a hot mess. He’s a seething cocktail of PTSD, depression, and anger, with a side-helping of borderline alcoholism. The giant holes in his memory don’t help either. When his partner, Kyle, walks out after ten years together, and takes his beloved dog, Travis hits rock bottom.

There’s no kind of future if he can’t face up to his past. Somehow Travis has to learn to breathe again.

“So, Travis, why don’t we talk about Kyle today?”

As usual, I levelled my stare at the stand-up name badge on her desk. Dr. Leah Forrester. So, Leah, why don’t we not? I kept the words inside my head. How was she in any way qualified to understand me? She was a chick. She had both legs. She hadn’t been to war. And judging by the sparkling gold band on her finger, she had a loving husband at home.

I didn’t want to be here. Period. The only reason I came each week was to get my brother off my case, or Brady would continue to bust my ass. It was an extra hassle I could do without.

A stray thought snuck through the fog. “How do you know about Kyle?” I spoke without thinking, and then wanted to kick myself. I’d agreed to attend the sessions, but that didn’t mean I had to participate. A petty distinction, but on the swooping roller coaster my life had become, I clung to even the tiniest amounts of control.

Her eyebrows tugged together, and she flicked back through her notebook. “You mentioned him. Two weeks ago.” She glanced up at me. “You indicated some intense feelings toward him.”

“He stole my damned dog.” I clamped my lips together before anything else fell out of my mouth. Most of the times I came to this office, I floated on a tide of alcohol. Now I thought hard, I did remember mentioning his name. What the fuck else had I said?

“How did that happen?” she asked.

God damn it. She picked my weak spot with the focus of a hungry mosquito. “I had Killer since he was a pup. It was me who rescued him from being drowned. Me who took him home. My name on his paperwork. He was mine.”

I grunted. “Achilles. Killer for short.” It had been a joke between us, saying, ‘Achilles, heel.’ “He isn’t a killer. He’s the softest mutt you can imagine.” A gentle giant.

“You said he was stolen?”

I ran a hand across the back of my neck. “Kyle took him. When he left.”

“Uh huh.” She made a note in her book, and then gazed at me, her face calm. “That came as a surprise? Your partner leaving?”

“Damn right, it did.” We’d argued, sure, from what I remembered. But was it bad enough for him to pack his bags and vanish from my life, when I needed him the most? “And I never thought he’d take my dog.”

“Perhaps he was attached to him too?”

I didn’t bother answering. It didn’t matter if Kyle had been attached to Killer. He still had no right.

“How long did you have your dog?”

“So who looked after him while you were deployed?”

“Kyle.” I fixed the therapist with a sullen glare. “And how is that relevant?”

“It was just a question. Do you think it’s relevant?”