Chicken stir fry – with a nod to Jamie Oliver

I took a pack of three enormous chicken breasts from the freezer this morning, with the idea of wrapping them in bacon and roasting for dinner. However, by 5pm they were still largely frozen, and there were few other options that could be rustled up quickly, so I had to improvise. I sliced them into thin strips, which meant they thawed in less than thirty minutes, and turned them into a stir fry.

My freezer yielded a bag of ready-made stir-fry veggies, and I unearthed a can of water chestnuts from the larder. I had some black-bean and garlic paste, and figured that would do for the sauce.

There was also a pre-mixed bag of frozen sliced mushrooms & green beans, but that didn’t work so well. Beans were lovely, but the mushrooms were, well, mushy. I won’t be buying that mix again.

Anyway. I watched a Jamie Oliver cooking show the other day where he made a beef & black bean stir fry, but at the start of the cooking process, he crisped up fresh sliced ginger and garlic, and used that as a topping. My ginger was frozen (in peeled, grateable chunks), so I couldn’t slice it, but grating it works just as well.

I can tell you. A topping of golden-brown, crispy garlic and ginger is DIVINE. Every other mouthful has a hint of crispy goodness, where the burst of flavour just pops on the tongue. 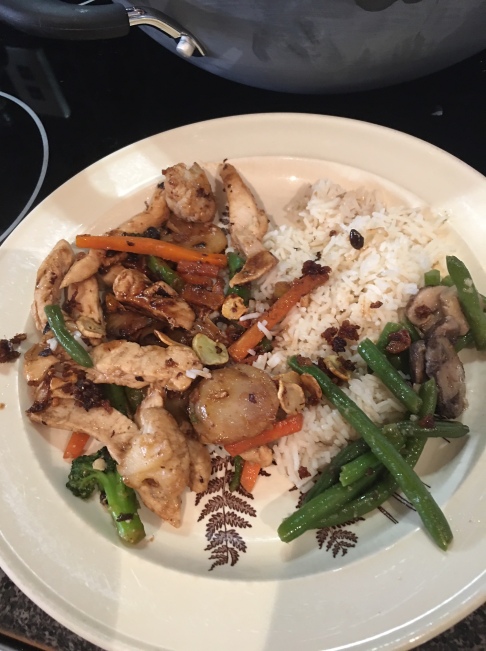 The original Jamie Oliver recipe can be found here: https://www.jamieoliver.com/recipes/beef-recipes/quick-steak-stir-fry/.

Also worth watching him prepare it in the video: https://www.youtube.com/watch?v=IYO7CLvh23U