The chicken was roasted with a fresh lemon quartered inside it, and another tray of the roasted medley of vegetables that were so successful a few nights ago. However, I didn’t want a conventional Sunday dinner, with veg and gravy, so I tackled a no-knead bread roll recipe. This came from the same website that gave me the delicious chicken kebab marinade, and I had high hopes for it.

It should be noted that although this doesn’t need any kneading, it still takes several hours to prepare, with two separate rising periods totalling almost three hours. I’m only pointing that out in case you thought they’d be ready in a hurry. On a lazy Sunday afternoon, though, it was easy to do the mixing and prep in between other tasks.

The recipe warned that the dough would be sticky and look unlike bread dough – hell, yes! I watched the video on the website, to check that my dough consistency was correct, and it was. If you try these rolls, I strongly suggest that you watch the video first!

The bread rose WAY more on its second rise than I was expecting, and the top browned a little too much in the oven, but it was good. It was soft, and sweet, but definitely heavier than a regular, kneaded dough. It will toast beautifully tomorrow to go with soup. It’d also be great as a base for bread and butter pudding.

The packet chocolate brownie mix (from Edmonds) is surprisingly good. It hasn’t got the depth of bittersweet chocolate of my homemade version, but it’s rich and dense, and fudgy in the middle. A win 😊

We adopted a kitten just before we went into Lockdown. Saffy (Sapphire) is settling in well, and mingling happily with our four existing adult cats. Tonight she had a few scraps of the cooked chicken, and I can report that she likes it. Very much! She now has a case of the zoomies 🙂 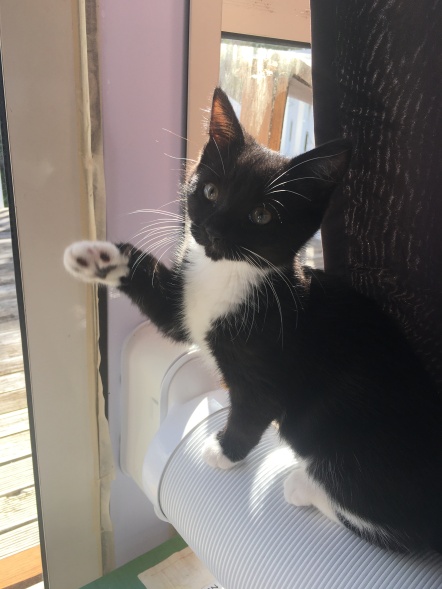