Subway was on our list of favourite takeaways, and Son was excited when he found the recipe online for their Italian Herb & Cheese subs. The challenge was on. Could we recreate their Meatball Sub?

The sub recipe had a couple of quirks, but I followed it to the letter.

The dough felt a little dry to me, but I was in a hurry between (online) meetings, and so I kneaded it as best I could, and set it aside to rise. It didn’t rise as much as I hoped, but I shaped it into four footlong rolls, and set them aside to prove. They proved beautifully and puffed up, ready for an egg wash and a generous sprinkling of dried herbs and cheese (combination of parmesan and mozzarella).

While they cooked, we assembled our fillings. Meatballs (the extra I made yesterday – planning ahead!), and some pork riblets from the freezer. We found a brand in the supermarket that tastes just like the Subway riblets, and they cook from frozen in 12 minutes. Bonus!

The first problem was that the bread burned in the oven. I’m sure the thermostat on my oven is faulty, as I always have to cook with a (guessed) lower temperature than the dial says. Things cook more quickly than they should, and even though I set the timer for ten minutes before the bread should be ready, it was overly crisp at the edges. I was gutted. I’d spent almost 4 hours in elapsed time making these babies, and the damned oven was too hot. 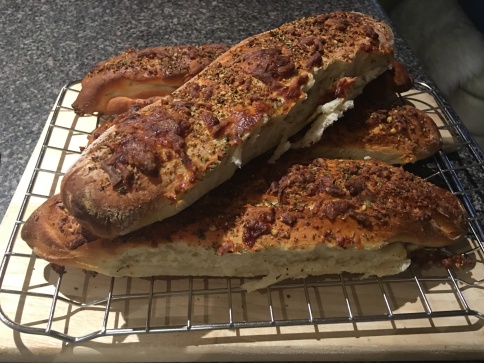 No matter, we trimmed the dry ends off, and started to cut and fill them – and here lay the second problem. We knew that the Subway staff have a special method of cutting the subs, and we tried to replicate it, but it didn’t work. Two split completely in half, and the others didn’t hold enough filling.

We stuffed half with meatballs, and half with riblets – and found there was no room for salad. A sprinkling of sliced olive was all I could squeeze in. The cutting technique definitely left room for improvement.

They had a super-quick trip back into the oven for the cheese toppings to melt, and then I served them.

The bread was more dense than the Subway ones, and too crusty. That was partly because of the heat of the oven, but I don’t think they would have come out soft-topped even without that. I need to investigate how to bake bread to come out soft. Maybe it needs to steam?

We’ll try them again, with more attention to the bread dough.

New Zealand is still under Lockdown restrictions. This blog intends to avoid the bad news about rising numbers of victims. It focuses instead on food, and the challenges of cooking fresh meals every day – with the ingredients from my larder. A much nicer message 😊