We are missing the local Turkish takeaway shop, and so decided to try and recreate a chicken doner kebab. I found a recipe that looked good, and we investigated the larder and freezer. Okay, so we don’t have everything we need, but we can make something doner-like.

I had almost all the marinade ingredients, apart from using chicken tenderloins instead of thighs. We also had to use tortillas, as I had no wraps, and they were fine.

Here’s the official recipe for the kebab meat. Watch the video – it explains how to skewer and cook the chicken pieces. 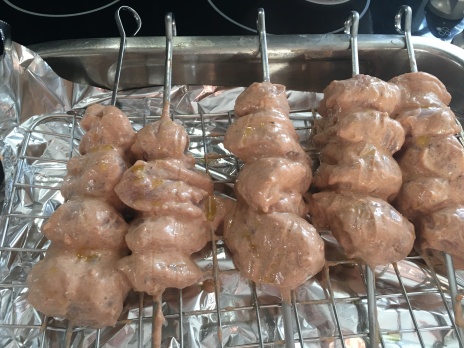 It was ALMOST perfect. I left it in the over a fraction too long, and because I used tenderloins instead of thighs, it cooked more quickly and wasn’t as moist. Having said that, the marinade was delicious, and I’ll definitely cook it this way again.

Because it was the end of the week, and we had a pitifully small amount of salad-stuff left, there was no lettuce or slaw, or anything to go in the wraps except the chicken, and some shredded capsicum (with yoghurt and chilli sauce, of course). They were still delicious though 😊

In other news, we ran out of fresh milk at the start of yesterday, and have tried three alternatives so far.

Fresh milk arrives in the shopping delivery tomorrow. It’s just as well. We can run out of bread, ham, and even cheese, but when we can no longer drink tea with milk, it feels like the end of civilization as we know it. Can you tell we’re English?