The firewood arrived this morning. This meant that today was exhausting. Tidying the garage and making space. Stacking the firewood in two separate piles (two different wood types), separating the kindling and sticks, and then sweeping everything afterward. Then when it was all done, we had to set off a bug-bomb, to kill the multitude of creepy-crawleys that always come along for the ride, and then tackle the horde of ants that break into the kitchen in their attempt to escape the toxic fumes.

Lunch was leftovers from the last two nights. Keema Matar and rice for hubs and I, while son finished off the Turkish chicken. He reheated it in a frying pan with a generous dollop of BBQ sauce, and some hot water to thin it out. Grated cheese on top until it was just melted, and then served in warmed tortillas.

Dinner was also a rush job, as (a) we were STARVING, and (b) the weekly grocery delivery was due between 6pm and 8pm and I wanted to eat first.

We fell back on a classic freezer favourite: frozen battered hoki fillets, with oven fries. Served with lashings of salt and vinegar, it was fine, if unexciting. 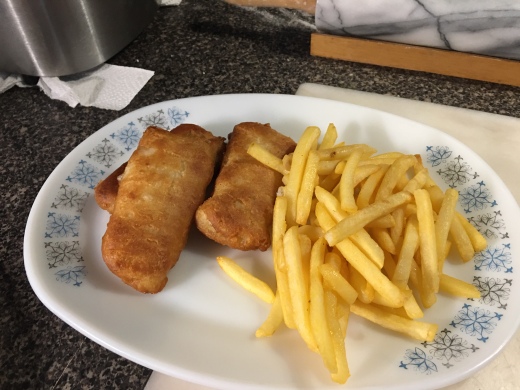 It’s 8pm and it feels like the first time I’ve sat down today. However, we now have fresh milk again * applauds the supermarket delivery service *. The house stinks of ant-spray and bug-bomb fumes, but we have fresh milk and bread. It’s all good.