Fusion Kebabs – with a side of Lamb Koftas

Tonight’s dinner fell definitely into Fusion as a menu option. We used the leftover Mexican ASADA beef, made spicy lamb koftas, and some Lebanese-style pita breads, and threw together a few salad accompaniments. The reason we had two meats is because there wasn’t enough beef to feed the three of us.

The pita dough came first, and was mixed and kneaded, then left to rise. Check out the recipe I used: https://www.thekitchn.com/how-to-make-pita-bread-at-home-cooking-lessons-from-the-kitchn-90844

It was all about timing tonight, and getting everything ready at once. 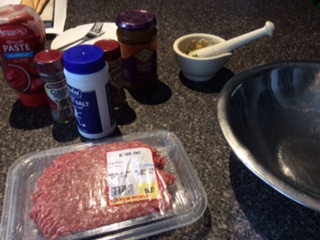 While the dough was doing its thing, I assembled the koftas. The recipe for this came from another of my ancient and much-loved cook books (An Indian Housewife’s Recipe Book, by Laxmi Khurana) where they are described as lamb kebabs.

While the recipe called for 4 x green chillies, the bag of chillies in my freezer are SUPER HOT and so I only used three. Seriously, these babies are insanely hot. Three was plenty. Then when they were mixed, shaped, and resting in the fridge, I had a couple of hours of waiting.

The koftas took half an hour to cook in a hot oven, on a wire rack (to let the juices drip away). They smelled SO GOOD while they were cooking… 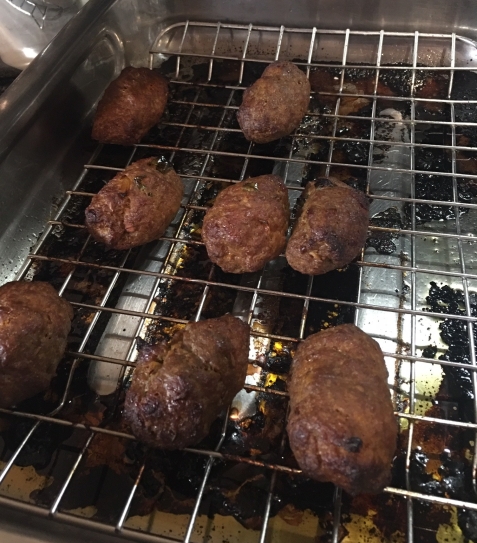 This gave me time to roll out three pitas from the batch of dough. The rest went into a Ziploc bag in the fridge, to use later this week. 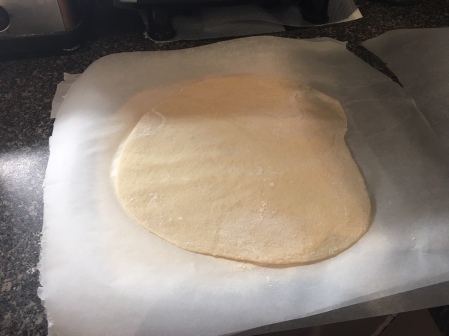 We decided last night to marinate the leftover beef in the cooking marinade, and then we shredded it tonight, drained it in a colander, and fried it in a searing hot cast iron pan until crispy. This took maybe ten minutes.

During this time we grated a carrot, shredded some lettuce, and assembled the other ingredients for the salad filling: chopped tomatoes, the last of the Greek yoghurt, and the remaining pickled red cabbage.

While the beef cooked, the koftas came out to rest, and I heated two metal baking trays, ready to cook the pitas.

This was the moment of the unknown. Would they puff up as hoped?

The first two puffed around the edges, but stayed flat in the middle, but the third blew up like a square balloon!

Assembly was quick. Slitting open the hot pitas and stuffing them with salad and shredded beef, with the koftas on the side. Don’t they look good? 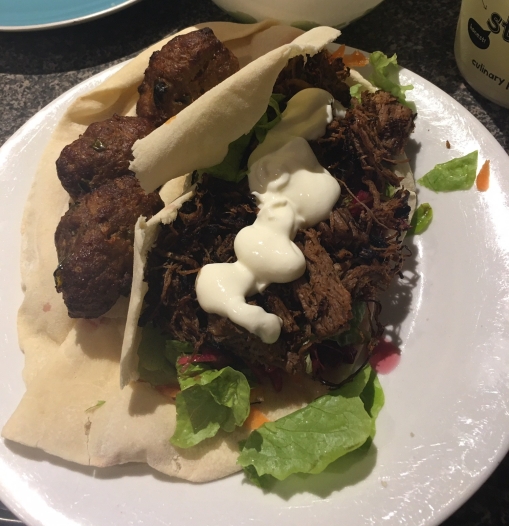 The taste was a delicious if quirky combination of spicy-hot, exotic and sweet-sour, all wrapped in a fresh-made bread. So good 😊

We had a grocery delivery today with most of what I ordered, but no mushrooms or fresh garlic. I’ll have to try again for those next week. Best of all though, my Lindt Lindor chocolates arrived * grin *.

Guess what I’ll be indulging in tonight 😊