Nothing fancy tonight, just a huge pan of chilli, a tray of nachos – and a small loaf of chili-cornbread. The cornbread was the adventurous part of the meal. Last time I made it, hubs called it chilli-cake, because it was the texture of a heavy sponge loaf. I figured it’d be fun to make to go with the chilli, and because I’m trying to introduce new foods.

The recipe came from another of my much-used recipe books, with two changes: I omitted the canned sweetcorn (I’m not a fan of sweetcorn), and I only made half the amount. Thus instead of baking in a 9” square pan, I used a standard loaf tin instead, and that worked fine.

The book is called The Great American Bake-in, by Patricia Lousada.

The chilli is as simple as it gets. A splash of olive oil in a hot skillet. A spoonful of crushed garlic, and a generous sprinkling each of dried chilli flakes and oregano. Add a slab of minced beef and stir over a high heat until it’s browned and no longer in clumps. Then I added two cans of chopped tomatoes, around a tablespoon of tomato puree, and a spoonful of sugar. This tip came from an Italian guy I worked with many years ago. He told me to always add a little sugar to any tomato-based meal, to reduce the acidity – and it works. Thanks, JP 😊

Back to the recipe. Add cayenne, salt, pepper to taste. I also added some Louisiana Creole seasoning that I found in the larder. And then cook for at least ninety minutes, for all the flavours to mingle. Yumm!

The cornbread took maybe fifteen minutes to measure and assemble, and cooked in around twenty minutes. A nice, quick side for the chilli.

I served with plain rice, nachos (courtesy of my son), and the loaf of chili-cornbread. This came out with way more of a kick than I anticipated, thanks to the two dessert-spoonfuls of chopped, pickled jalapenos. Yowza! The cornbread was spicier than the chilli, and that was no slouch in the taste department. 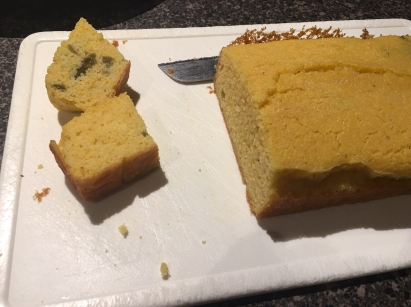 Best of all, there’s enough leftovers either for lunch tomorrow, or to be re-jigged for dinner.

In a few days’ time, New Zealand will transition from Level 4 Lockdown, to Level 3. At this stage, we will still be staying at home, and so this culinary blog will continue 😊