A lesson in sub-standard haloumi, a chicken fajita salad, and dessert pizza

Tonight, for once, we planned dinner around the dessert course. We rarely have a dessert, so this was a new departure for us. We would try to make a dessert calzone, and so it was important to have a light main course, or there wouldn’t be any room for it.

We’ve been talking about trying a dessert pizza since having one from our local woodfired pizza restaurant (the excellent Heavens Pizza in Waikanae – http://www.heavenswoodfirepizza.co.nz/). Theirs was bursting at the seams with a combination of chocolate ganache, mixed berry coulis, and mascarpone cheese. Drenched in icing sugar it was divine, if a little sweet, and that was our goal.

We had to make changes, of course. No mascarpone, so we substituted some regular cream cheese. I only had frozen raspberries, so that formed the coulis, and we couldn’t decide on the chocolate approach. In the end we made two small calzone, and filled them slightly differently.

Anyway. Since we had some plump chicken thighs, I decided to make the Chicken Fajita Salad (from The Londoner blog – https://www.thelondoner.me/2016/01/chicken-fajita-salad.html). My salad would differ in ingredients, but the marinated chicken and cooked peppers that formed the base would follow the recipe. I’ve made it before and it is delicious.

It’s called Chicken Fajita Salad because it’s like a deconstructed fajita. Tasty, spicy chicken, pepper strips and salad, all tossed together, with a dusting of crumbled feta cheese. Yummmmm!

We agreed though, that salad wouldn’t be enough on its own and so we used the last of the pizza dough to make another two garlic breads to accompany dinner. This turned into another foldy-over-garlic-bread (see yesterday’s Pizza blog post), and a regular flat garlic bread.

The garlic breads were excellent. The Chicken salad (made with spinach instead of lettuce) was delicious – and surprisingly filling – and then we had the dessert calzone. 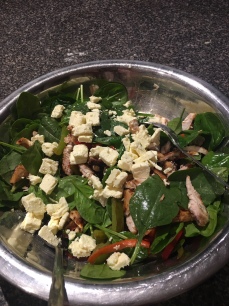 Son and I couldn’t agree on how to dress them when they came out of the oven. I wanted a cheffy approach with a smear of coulis on the plate, and some chocolate shavings, but he preferred the coulis to be spread across the top of the calzone. I thought it looked like roadkill, but since he’d done the bulk of the work assembling them, it was fair for him to decide.

I have to say, they were good. We cut each one into 3 pieces, so we could each try both of them. We need to do them again, with the following changes:

I mentioned sub-standard haloumi. Here in New Zealand, there are several manufacturers of haloumi cheese, and we’ve tried most of them in the search for the perfect cheese. Unfortunately, our local supermarket doesn’t always have our favourite brand in stock, and so we’ve had to try some alternate labels. This one tonight, was a disaster. Son had previously tried cooking it in the Breville sandwich press (thin slices between baking paper sheets – it should turn golden and gooey within a few minutes), only to find that it melted into a sticky liquid. We decided tonight to try frying it in the pan that had previously cooked the chicken and peppers. Dry frying usually works well for haloumi. NOT THIS TIME.

It oozed whey – a lot of whey, and then started to melt. It looked more as though we’d put slabs of mozzarella in the pan. And then the clumps stuck together like some fiendish scientific experiment on alien brains. Disgusting was a polite word for it. In the interests of culinary science, son tried a blob of it, but it was inedible, and scraped into the bin. The lesson we learned? Another brand that we will avoid.

We find out next week if New Zealand will be easing the lockdown restrictions further, and when that will happen. For us, there shouldn’t be much change. We’ll continue to buy our groceries online (which we did before lockdown, anyway!), and restrict ourselves to online shopping for the most part. I hope to continue working from home, and son hopes to continue studying from home. We’ll find out soon.

While preparing calzone and assembling salad last night, we agreed that this has been an unexpected benefit from lockdown, that we have more time to spend planning and cooking, and have been able to experiment in a way that isn’t possible during a normal working week 😊